As a German I obviously have no say in the upcoming US election – no one outside of the US does, which of course makes sense since that’s how national elections work. So I’m unsure if I’m even in a position to add my two cents to the table, just two minutes before proverbial midnight (not that this will likely change anyone’s mind, but I couldn’t resist).

Still, the entire world has been watching both campaigns with utmost rigor. German media has analyzed the debates as if Clinton and Trump were running to be Germany’s next chancellor. I can only speak for myself, and yet I feel as though the whole country is on edge awaiting tomorrow’s results. They should be, of course – after all, what happens in US politics influences and affects nearly every other country in this world (for good or for worse, but let’s not get in to that). Just to name on example: NATO, Japan, South Korea, Taiwan, to name a few, all rely on US military power, should worse come to worse.

We’ve seen a few times in the past century what happens when the US economy collapses, most recently in 2007, and many countries in Europe still feel the consequences today. Let’s face it: The US continues to be, without a doubt, the world’s political, economic and military superpower.

And this is where this election comes in. Frankly, as a non-citizen I shouldn’t care what happens in the US domestically. Of course in a way I do; I’d like to see the US be an example to other countries, given its position in the world, but as a German it just does not affect me. Gun control, minority rights, minimum wage – I have personal preferences on these, but what the next president of the United States decides on such topics doesn’t affect me, so I won’t care or complain.

What will, affect me, however, is US foreign policy. I don’t actually have to name the candidate who is probably the best-qualified presidential candidate in recent history (in this context concerning foreign policy and knowledge about the world’s various crises) and knows how to position the US within the international community because of years of experience. Or how to make basic economic policy for the largest economy in the world. Of course, human decency is a big plus.

As someone who sort of grew up in the US I like to think that I somewhat understand it – or perhaps better than someone who’s never been there. I know how proud Americans are about their country and its position in the world. So they should also realize the influence it wields globally. As much as it is criticized abroad, for many countries the US still sets an example to be imitated. How can we as an open and democratic community persuade human rights-abusing authoritarian states to change and liberalize if the USA is run by a demagogue who wants to build a wall to Mexico and bar Muslims from entering the country? It’s difficult enough now as it is.

Maybe its illusory to think so, but I’d like to believe that on November 8, Americans don’t just think about the consequences that the next presidency will have on their country only, but also on its effects on the rest of the world. If you truly believe to be living in the greatest country in the world, then vote by setting an example and living up to your own expectations. #americasalreadygreat #idbewithherificould 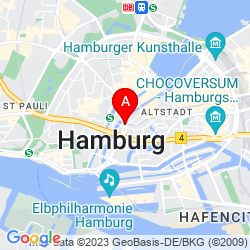