Thinking about Nepal, I imagined the big Himalaya range with its highest mountains of the world. I imagined wide green meadows above which Tibetan prayer flags were hanging. I also thought Nepal was a Buddhist country as Tibet and China are so close by. And I expected it to be cold. Therefore, I must say that I was quite surprised and maybe even deceived when I arrived in a stuffed full Kathmandu sunk into dust and pollution.
With its 4 million people, quite a lot of the 30 million Nepalis are living in the capital in the country’s heart. Here there is action, work and consequently an increasing amount of men, cars and houses. Still, more and more cars are sold on special offers but where to put them? Only in the recent 3 year, the pollution and street chaos increased visibly. On the contrary to Tunis, there is not even a functioning public transport system. No railway exists expect a very small one coming from India. No tram, underground or metro. In addition, all those traffic rules are violated regularly whenever possible. On my way home from a short trip to tourism headquarter Thamel, I finally understood why. If all vehicles stayed in line one behind the other, the entire city did not have room for all cars, motorcycles, taxis, busses, small busses, bikes and tuktuks.

Therefore, I must say I’m incredibly lucky to be living just 5 minute walk by foot from the Embassy as I’d throw a tantrum on a regular basis. Being at the third station of this year abroad, I must admit that my patience and acceptance for things I cannot understand is rapidly decreasing. It seems so hard and embittered, and maybe that’s exactly what I am. What drives me crazy is the shier unnecessarity of it all. It would be so easy to install exhaust filters for emission reduction. What for? For decreasing the number of yearly lung cancer deaths, increasing the life quality of millions of Nepalis firmly, and improving many people’s health. But why not? Out of pure particular interests by a Maoist government to which their own nation’s health obviously is not relevant? Of course especially in winter time, heating emissions even deteriorate the pollution and also many industrial companies cheerfully pump CO2-emissions to the air. But wouldn’t it be a first step to counteract the rising smog and heavy soiling of the city? Just now, my host father told me that he could still see the beautiful Himalaya range on most days in his childhood from where we stand now only seeing houses and grey-blue sky. He says they seemed so close, within arm’s reach. Nowadays they become visible for a short while only after days of rain which washed all the dust out of the air.

Nonetheless, there are masses of organisations which get engaged, which do good, and which exert themselves for Nepal to develop towards a freer, more democratic, more equal and progressing nation. When looking back, Nepal had to adapt to outrageous challenges so that one can understand that some things stay back. Not for long did Nepal open up internationally. After many decades of closure, new ways of thinking almost expanded like an explosion. Imports brought such a load of plastic, aluminum and other materials that could not be used for years anymore or were compostable as usual. On top of that, consumption and production grew out of control as more and more families took part in economic rise. No wonder that awareness is lacking to handle these materials with care, to think about their footprint on the environment, or to separate waste. I am therefore torn apart between giving Nepal just a little more time to figure all that out on its own or to appeal to the Nepali’s common sense that this might not develop any further without foreign intervention. Is the Maoist government really the best partner for achieving such a progress while they still believe communism to be the final solution for all towards a free, just and clean Nepal?

In the second week of my stay, I had the pleasure to make another experience which made me change my mind quite thoroughly. During the low-flying landing above the hills around Kathmandu Valley, I got a first idea of rice paddies, green hills and tiny villages all along the ridge. The view from the mountain station of Chandragiri, however, was even more impressing than that. Even though Chandragiri is visible to the naked eye from Kathmandu’s city center, the drive at peak time took 2 hours which is totally worth. Already here, only few kilometers away from the big city, the air is amazingly clean and the view is spectacular. The Himalayan mountains of which many are above 8000m are truly awe-inspiring and within arm’s reach. The view from the cable car reaches over snow-white mountain peaks, green hills and deep into the vallew while it slowly leads up above. On the peak, the ear I breathed was much fresher than expected and it felt to wonderful to finally breath in at the fullest without concern about my lungs. I even could see Mount Everest with the blank eye which I did not even reckon before.

Well, I have to admit that I’m a true mountain person instead of a sea person, where everything changes within a step I take. Since then, this allows me to escape the dusty city and let my mind wander in remembering this day. Truly, I was lucky to take part in this excursion which showed me another piece of this multi-faceted mosaik of Nepal. Let’s hope I’ll get to the mauntains again, soon. I can’t wait and I’ll keep you updated.

One thought on “Living in … Kathmandu!” 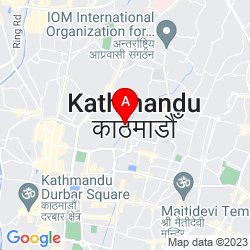